The B(h)ambatha Rebellion is regarded by many as the beginning of The Struggle against Apartheid which culminated 88 years later almost to the day with the first Democratic Elections in South Africa on 27 April 1994.

Here follow a few "personal" accounts of the Bambatha Rebellion, 1906.

In October 1968, one Mishak Mthilane consulted Attorneys Nel & Stevens in Greytown. Their Interpreter, Gilbert Maphanga took this statement from him about his participation in the Bambatha Rebellion in 1906.

During April 1906, Bambata came back from Zululand. He collected young men and instructed them to catch his uncles Magwababa and Funizwe. Magwababa was caught at night, Funizwe ran away. The following day I armed myself with others and went to a fort called Mdayi near Mpanza where we found Magwababa in captivity with others. Magwababa’s wives went and reported to a European farmer (Voyizana) Mr Phillip Botha that Bambata had taken Magwababa to kill him. Mr Phillip Botha went and reported to the Magistrate here in Greytown. The following day European Constables went to Mpanza on horseback being accompanied by the Magistrate (Dhlovunga) to see what had happened to Magwababa. They passed Mpanza and went to Mpofana (Keate’s Drift) where there was a Police camp. They remained there the whole day. We were guarding their return. At about dusk the spies saw them coming back. The Magistrate came up to where we were hiding. Shots were fired at them and they ran away. As the Police Constables were coming up at dusk we hid in the bank of the road at Nhlenyana. 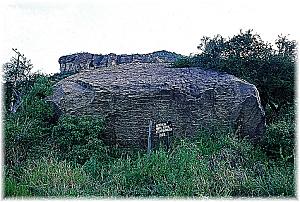 They were in separate groups. The first group passed. Then the second group was passing one of us threw an assegai in the third group and said "Usuthu". We rose and fought. We fought the Police who ran away and we went back to our fort. We slaughtered cattle and broke into the bar of the hotel, took liquor and drank it. In the morning we went to a farm of a European "Mkhovu" where we took a horse which was ridden by Bambata. We went towards the Tugela River. Bambata sent a message to Chief Silwane Mchunu that he must arm an Impi because he, Bambata, had started a war with the Europeans. He also sent a message to Chief Nyoniyezwe Ngubane. We crossed the Tugela River and went to Nkandhla where all the Chiefs and their Impis were to meet him. On the way we caught another horse which was to be ridden by Chakijana Sithole the Chief’s main Induna. When we were crossing the Tugela river it was about full. Chakijana fired a shot in the air and then we heard that were going to Zululand. We arrived at the kraal of Induna Mangari Ndlela who took us to Induna Sigananda Shezi in the Mome bush. He slaughtered a beast for us. Sigananda collected his warriors. After a month in the Mome bush periodically fighting with Bantu warriors favouring the Europeans, one day we fought with soldiers from Eshowe from morning till sunset. Many warriors died and many were injured in this fight. Several Chiefs joined us. We moved from Mome bush to Qhudeni where we found other Chiefs with Bambata and many warriors. A man by the name of Elijah came to us and said the European soldiers had gone and we all went back to the Mome bush, not knowing that this man Elijah was sent by the European soldiers to lead us into a trap. We entered at dusk. In the Mome bush I saw someone on top of the hill lighting a match. Early in the morning the soldiers fired at us. Many warriors died. I hid under a rock till midnight when I came out of the bush and walked towards Qhudeni. On the way I met others and came back. I was arrested and kept in custody for four months. I was sentenced to two years imprisonment.

The then Natal House of Assembly passed an Act levying a £ 1 Tax on all Native Male members over the age of 18 years which was commonly known as “Poll Tax”.

The first trouble arose when the Magistrate of Kranskop, Mr. A W Leslie, who later was promoted to Judge of the Native High court.  Mr. Leslie went out to collect tax at Silverstream as base for Tax collecting for the Hlongwas and Cele Tribes under Chiefs Mtamu and “Sobantu” respectively.

Next was Bambata with his followers who adopted a threatening attitude against a small party led by a Magistrate who had set out to demonstrate with Bambata.  Shots were fired and the small party were forced to withdraw on Marshals Hotel on the main road in the Mpanza Valley.  At the hotel were 3 women, mesdames, Hunter, Marshal and Borham and they together with the Magistrate’s party made their way as speedily as they could to the Police station at Keates Drift on the Mooi River.  The rebels did not follow them, but contented themselves with ransacking the Hotel and helping themselves to liquor.

News spread to Greytown, and a force of Natal Police set out to bring in the fugitives who had barricaded themselves in the Police station at Keates Drift.  They reached the Drift without having seen a sign of the enemy.  They then returned to Greytown with the women.  They halted at the looted Hotel.  They continued to march after sunset with an advance guard.  They reached a spot in the Impanza Valley where the bush was very intense on both sides of the road.  Bambata’s men hiding in the dense bush rushed the advance guard shouting their war cry “Usutu”.  It being dark the men fought themselves free with difficulty, and linked themselves with the main body who were 150 yards in the rear.

Sergt. Brown, Sergt. Harrison and Troopers Aston and Greenwood were killed, while 5 were wounded.  They then picked up the wounded and marched back to camps.  Troops were then mobilised and were going to bombard Mbata’s location.  The morning before the bombardment Bambata escaped with his impi to Zululand by way of Doornhoek and Lootshoek in the Kranskop district.  Crossing the Tugela and up the Manyana streams.

The Kranskop reserves were then mobolised and followed two days after by the same route as Bambata had taken.  They passed the turn off he had taken into the Nkandhla Bush, and went on to Kandhla Magistry.

The U.M.R. Greytown and some Kranskop reserves stationed at Ingwebevu on the Tugela then marched into Zululand 240 strong skirting the Qudeni mountain on Cattle raiding tour, going beyond Pukunyoni mountain.  Returning to camp were told to pich camp under the Pukunyoni.

On the morning of 28 May, 1906,  a detachment of the U.M.R. under Luit. Nuss were sent out to see if the way was clear to move on.  They came on a Zulu impi marching on the camp.  They fired a few shots and retired to the camp.

A square was quickly drawn or formed with the horses inside and about 1000 Natives levies (they were from Inadi reserve) who had joined the cattle raiding party the day before.  The first rush of the enemy came from the North side where there was a big donga.  They were shot back, some fled from the East, were it was thick bush a few yards from the square.  They were shot back.  Then they drove a troop of cattle on the square on the North-Eastern corner, many Zulu being among the cattle edging them on with their assegai’s.  The corner of the square had to fall back to allow the cattle to pass.  A lot of cattle were shot down, and Zulu’s were shot 5 yards from the line of fighters.  With many other sorties, they even finally withdrew from the donga’s.

Rifles were fired from a hill “Very bushy” about 300 yards away on the camp.  One European was shot dead and several wounded, and some Native levies were killed and many wounded. The dead and wounded were then carried away with the contingent who retired on the Buffalo river, and next day to camp at Ingwebevu.

A Col. Barker had come down from Johannesburg with 500 men and together with the local troops they operated in Zululand near the Nkandla where they trapped the main impi at the Mome Gorge, killed Bambata and other chiefs which ended the activeness of Bambata and insurgents in Zululand.

In the meantime Chiefs Meseni and Goluzembe had rebelled in the Mapumulo area and the fighting was then moved to that area.  Col. Barker operated from Noodsberg towards the Umvoti River, Col. Leuchars from Mapumulo towards Umvoti River.  The first clash was with Col. Barker and Meseni’s men.  They way laid him, but he killed 200 of the enemy.  The two Col. cleared the Umvoti River area and a clash took place at the “Insamba” towards Tongaat.  The enemy were there routed and a few hundred killed.  That ended the Bambata rebellion.

Arising from the rebellion the Zulu King Dinizulu was suspected of having a hand in murdering loyal Chiefs in Zululand, several had been shot through the door of their huts of an evening.  Then the Magistrate of Mhlabatini in Zululand “Mr. Stainbank” was shot in a drift whilst watering his horse.  Two hundred Police were then sent to arrest Dinizulu near Nongoma.  The tribe armed themselves to resist the assist.  All troops were immediately mobilized (4000) and sent to Nongoma in about 48 hours 43 train loads of troops and their horses left Durban for Zomkele the nearest train terminus from where they rode to Nongoma.

The evening the second day the troops left for the Usustu kraal.  The next morning the kraal was surrounded when 200 men were detailed to rush the kraal.  They found Dinizulu’s army there on the parade ground but all unarmed.  Dinizulu had stolen a march on them, he had left the kraal with a donkey wagon for Nongoma where he surrendered to the Authorities.  He was taken to the Railhead and sent to Maritzburg.  His trial took place in Greytown and he was banished to Rustenburg in the Transvaal where he died.

HERE FOLLOW SOME LETTERS THAT WE HAVE  RECEIVED FROM VISITORS TO THIS SITE. We would appreciate more contributions! 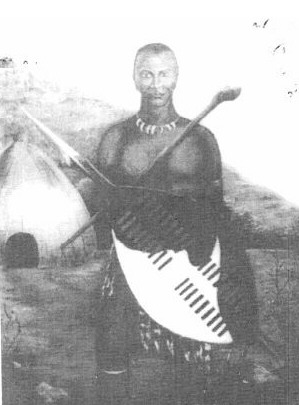 Zulu Rebellion 1906 - Scenes at the front

I bought an album containing these photographs at an antiques fair several years ago thinking they might have been related to the New Zealand military, but searching on the internet I find that they actually show South African troops. All titles used are as written in the album. Some of the photo's have serial numbers on them which make me think the album was not a one off, but perhaps something the photographer made up as requested by customers. Unfortunately there is no indication who took the photographs

I've found mention of some of the officers in the images:

Ian Knight contacted me with some more details:

...the 1906 Rebellion was one of the last Zulu uprisings against colonial rule (there was a big event in South Africa just last week to commemorate the centenary, funnily enough); your photos show some of the activity in the region along the Mzinyathi river - which had previously been fought over in the Anglo-Zulu War of 1879 (hence the photos of the 1879 battlefields of Isandlwana and Rorke's Drift). There are a number of pictures there of the followers of an important chief called Mehlokazulu''s district - his indunas (headmen) and wives being questioned and his home in flames. Mehlokazulu was one of the most important Zulu chiefs to join the rebellion - the other was a chap called Sigananda (whose portrait is also included in your album).
I''m not sure they are unique images. Some I''ve certainly seen before in South Afican collections - the others may be there too, but I don''t recognise all of them.

If you can help with information about the events and people shown let me know.